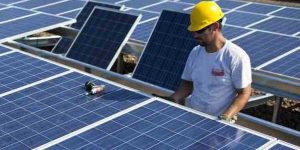 When it comes to smart investment for your business, there really is no better place to look than at the sky.

New statistics, released by industry analyst Sunwiz, indicated a growing realisation that one great option to deal with the cost of energy and reduce business costs is to install rooftop solar.

The new statistics, according to reneweconomy.com.au, follow a report that showed that the average uptake of rooftop solar in Australia had now reached 25 per cent, and above 31 per cent in Queensland.

Queensland leads the way across the nation with 1.77GW of rooftop solar installed – bigger in capacity than the state’s largest coal fired generator.

According to the news report, businesses are the biggest mover in the uptake of rooftop solar, possibly because they are being hit with even bigger rises in electricity bills and accounted for a record 33 per cent of installations last month.

Sunwiz director, Warwick Johnston, told renewecomony.com.au that June was the biggest single month since 2012, when the solar multipliers were winding back and some feed-in tariffs were about to end.

“And this is even before people receive their first electricity bill, which is likely to be 10-30 per cent higher – suggesting the pace won’t let up in the second half,” Johnston said.

From this report, it is clear that businesses are taking the right step to a cleaner energy future, but it’s good to point out the promotional benefits of a solar powered workspace too.

Lots of people are naturally attracted to businesses that engage in sustainable green practices. These days a business can separate themselves from the competitors and win contracts to better their business, simply by showing their investment in the environment and the future of the planet.

According to many key solar ambassadors, solar is a sign of personality, that a business has a deep-seated concern for their environment and the community at large. Consumers often have a more positive view of companies that “go green” and this can lead to more sales and higher revenue.

Investing in solar for your business means your business can display leadership in the community, attract customers, gain promotion and reap countless financial advantages.

Save on Power Bills with the Tesla Powerwall